The tomatoes, peppers, corn, cucumbers, garlic, shallots, summer squash, and winter squash all did well this year.  The tomatoes yielded enough to provide all the spaghetti sauce and canned tomatoes we need and enough for our friend who harvested the early crop as we were out of town when the harvest started.  The paste tomatoes suffered from Blossom End Rot which caused 20% to 30% of the yield loss.  The plants themselves were the best I have grown since moving to Oregon.  This was the first year I laid down a heavy layer of horse manure on the coming year’s tomato and pepper rows in the fall and dug it in in the spring just before planting.  I did not have the massive weed problem I was worried might happen with this strategy.  More about that later.  I seeded the tomatoes on March 15 and planted early in May.  The tomato plants were leggier that I would have liked but they grew very well, just hard to plant.

Peppers were great this year, great plants, heavy yields, and little or no disease or insect damage.  We froze 15-1 gal. bags, and several of our friends harvested all the peppers they wanted.  All in all, a great pepper year. I seeded the peppers on March 11 and planted early in May, the peppers were perfect sized for planting and took off.

The melons were a disappointment this year.  I seeded melons early in April. They germinated well and were up potted.  After I planted them out in the garden they failed to thrive. I direct seeded to get them to go, they failed to germinate, I reseeded in the greenhouse and planted the starts in the garden and they took off.  With all these delays, the plants were planted late in the season and I did not get many melons.

The blackberry row produced very well this year.  This was the second production year for the blackberries. The first year production was minimal; this year the product was much better as the plants are getting stronger.

The raspberry row produced well for the second year.

The blueberries produced well, even though they seemed to take a long time to get ripe.  The plants are a few years old and starting to produce.

The strawberries not produce as well as I would have liked.  They are being grown in a 6-inch pipe planter with a drip line.  I wonder if I am over watering them as the plants are not all that big.  Growing strawberries in a pipe planter makes for easy maintenance and harvest.  I am thinking about adding a second row to get the yield we would like.

The cherries were good this year. We erected a bird net enclosure over the two older trees and baited the rodents, which improved the yield.  Both sweet and sour cherries produced very well.

The apples were a disappointment. We seem to be in an alternating year for apple production, with a heavy year following a light year.  This was the light year and the yield was close to zero.  The Gravenstein had a normal yield, while the Melrose, Golden Delicious, Winesap, and Granny Smith produced very poorly.  We also had some very cool late spring temperatures that I am certain reduced the yields.  The 12 trees I planted two years ago are growing well, but not mature enough to product fruit.  This year I will be planting 11 trees that I plan to espalier.  They are grafted on M7 dwarf stock.  I plan to create a 4-level espalier which should product well.

Pear yields we down as well. Maybe due to the cold spring temperatures.  Scab problems persisted even with aggressive windfall fruit clean up and dormant spray regiment.

Plum yields were low and mostly lost to critters (most likely racoons).

Finally, the peach tree was mature enough to have a small yield which became ripe while we were on vacation. Our friend enjoyed that fruit.

When we moved here I started a massive double digging effort, working about 70 cubic yards of compost into the 7000 sq. ft. garden to a depth of about 2 ft.  A few years ago I secured access to a good supply of fresh horse manure and started working that into the garden.  There are two main concerns with using manure, application to harvest timing, and weeds.  I apply the manure in the fall’ mainly to five rows in the upper garden and two rows in the lower garden to a depth of about 18 inches, finishing late in October. If it dries out enough to till during the winter, I will till the manure rows mid-winter.   When the ground dries out enough in the spring I till the manure in well before planting.  I plant tomatoes and peppers into three of the upper garden manure rows and in late September the following year garlic and shallots into the remaining two rows.  With my rotation schedule, the upper garden gets the manure treatment every other year.  I plant winter squash into the lower garden manure rows.  With the lower garden rotation, those rows get the manure treatment every fourth year.  Weed seeds in the manure sprout in the winter providing a robust cover crop of nasty weeds, which get tilled in.  I would expect more seeds to sprout during the season, but actually, it is quite minimal.  I think is due to my use of t-tape irrigation which is a subsurface drip irrigation system which results in a very dry soil surface.

Below you see most of the upper garden with two 60-ft rows of garlic and shallots. These are planted on either side of 4 t-tape irrigation lines placed on 16-inch spacing. The cloves are planted on either side of the t-tape on 6-inch centers.  This gives me 16 60-ft rows of garlic and shallots on 6-inch centers yielding about 2000 plants if everything comes up.  My goal is 200 lbs.  The row between the garlic rows are for peas and onions.  The bright yellow is asparagus. In that row there are some kale and fennel; the far row are herbs.  Between the garlic and the asparagus you see the manure mounded on three rows.  I also put all of the garden waste except the tomato and pepper plants on these rows.

Below you see most of the lower garden. The dark rows at the far end are the two manure rows, which I was able to get tilled in.

Tomato and pepper clean up will be completed after the fruit rots, falls off, dries up.  I will cover two of these rows with manure and all of the tomato and pepper waste.  This will be tilled in in the spring. The two rows on the left will be for cucumbers and green beans next year and the two rows on the right will be planted in garlic and shallots late September next year.

In the past, I would order 15 cubic yards of compost from DC Co-op, which would be delivered in a big pile.  With the manure source, my need for compost is reduced so I decided to build a 3 cubic yard enclosure and haul the compost in my truck dumping it directly into the enclosure.  A friend of mine suggested that I put some of the manure in the enclosure and create my own compost.  What you see below is the enclosure made of concrete blocks and reclaimed boards.  There are two yards of compost in there covered with a third yard of manure.  The manure was dry so I have the top open.  Once we get a fair amount of rain I will cover the enclosure and let it cook until spring.  With luck this will work and I will have a nice pile of compost.

As the 2018 garden comes to a close, and I am trying to get my notes completed (wish I was better at keeping notes during the season), inventory my seeds (dumping stale seeds), making the list of seeds I need to order, and adjusting my seeding and planting time tables, I think about what went well, what went poorly, and what was just too much work and how to avoid doing that or at least make the work easier.  Most importantly, I remind myself that the garden is a fun way to fill my summer days. 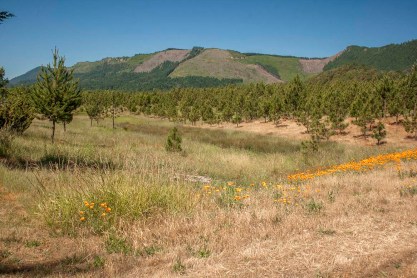 Eastern edge of the upper pond

The gazebo at the house 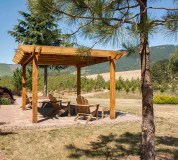 On the upper dam looking down on the lower pond 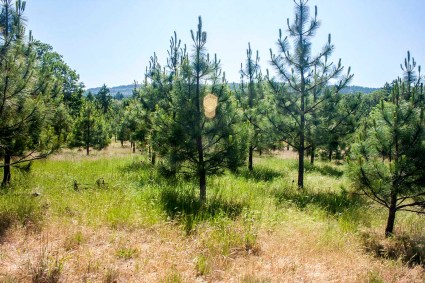 Lower dam looking toward the upper dam and house

Mountain view from the lower dam

Walking the western outside perimeter of the vegetable garden

Checking out the underground shelter 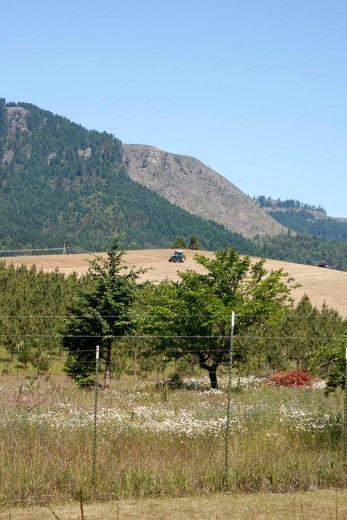 Aerial view of the vegetable garden and orchard 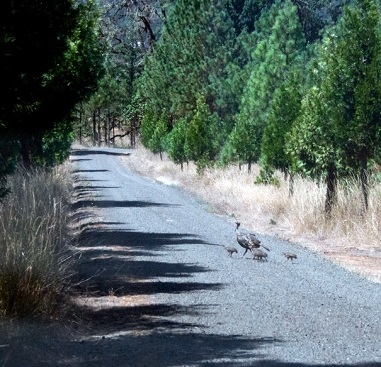 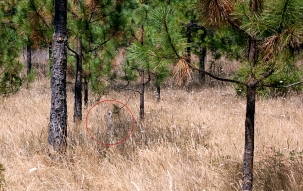 Turkey hiding in the bushes

Close-up of the pine trees

Elk herd seen on the road to the coast
Loading Comments...